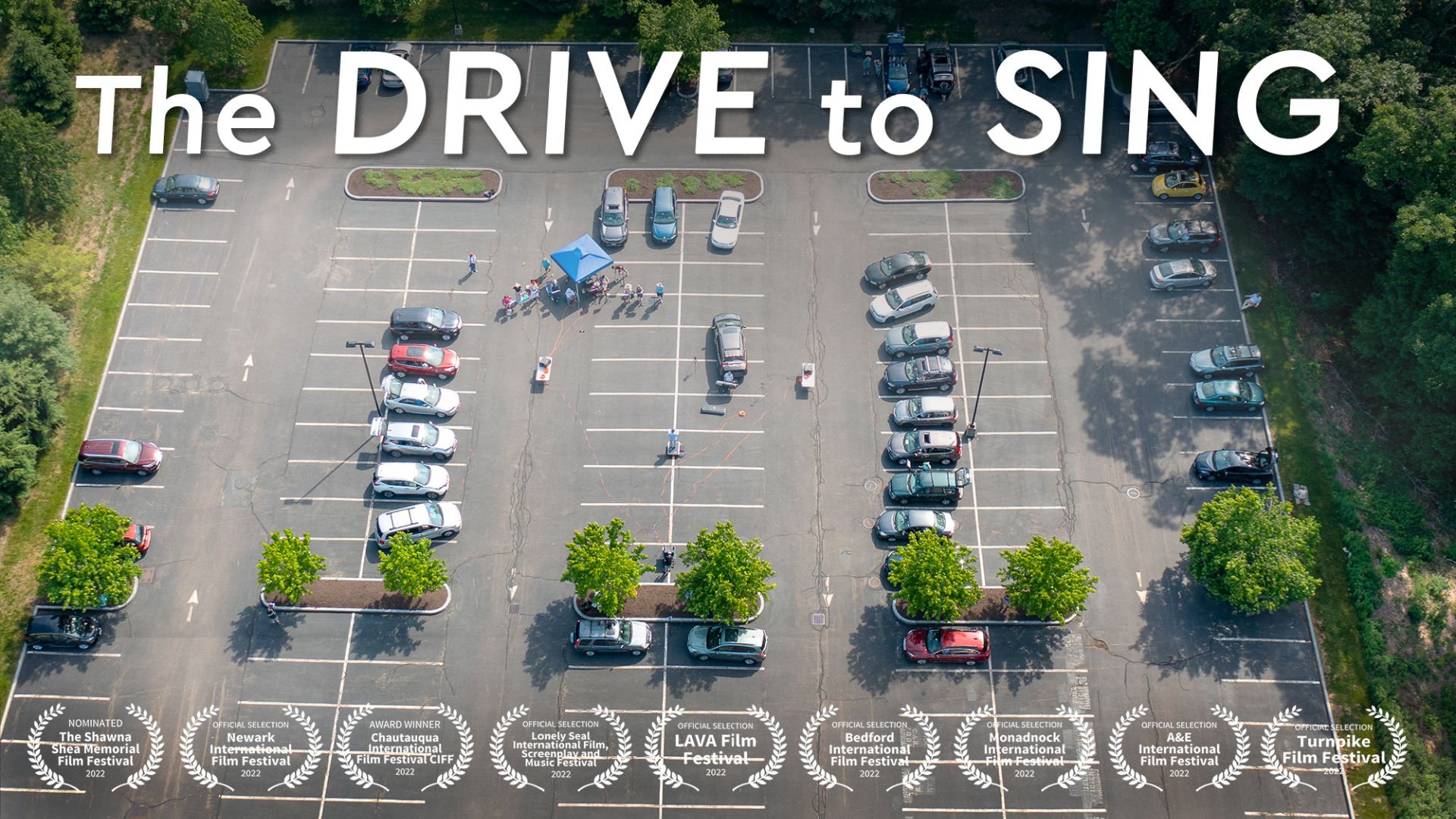 The Drive to Sing is a documentary film that tells the story of the Car Choir which began during the 2020 pandemic lockdowns. Released in July 2022, the film shares the experience of choruses who found an unusual way to continue singing together despite a global pandemic. The film has been accepted to nine film festivals and was named "Best Inspirational Documentary" by the Chautauqua International Film Festival.

Do you remember the musical drought at the beginning of the COVID-19 pandemic way back in March 2020? We all do. Singing together indoors was suddenly a dangerous activity, and we all thought we might not be able to sing with a chorus for months or years. This was heartbreaking for singers around the world, because not only were their musical lives silenced, many people's social lives are centered around friendships within their choral ensembles.

Do you remember the first time your choir tried to sing together over Zoom? The words "latency" and "aerosols" became regular parts of conversations. Did you prop up a cell phone and record yourself singing alone for a virtual choir? Some groups sang outside, or in stairwells or parking garages. Some found online applications designed for music. Some groups took a long pause. Everyone was looking for solutions.

The Mechanics of Car Choirs

Two years ago, baritone and music theory professor David Newman developed the first idea for Car Choirs in Virginia. We collaborated with David and assisted choruses throughout Eastern Massachusetts in establishing their own Car Choirs. When the news reached New Jersey, Somerset Hills Harmony added their own innovations and taught the world about the concept through a series of well-attended webinars. Tori Cook wrote an article that explains it all very well: Could Drive-In Choirs Be the Solution We Have All Been Waiting For?

Many choirs were asking the questions: how do we find all that equipment? Who will set it up and run it? Is it satisfying to sing with someone whose silhouette you can barely see in the next driver’s seat? What about rain and snow, or heat? 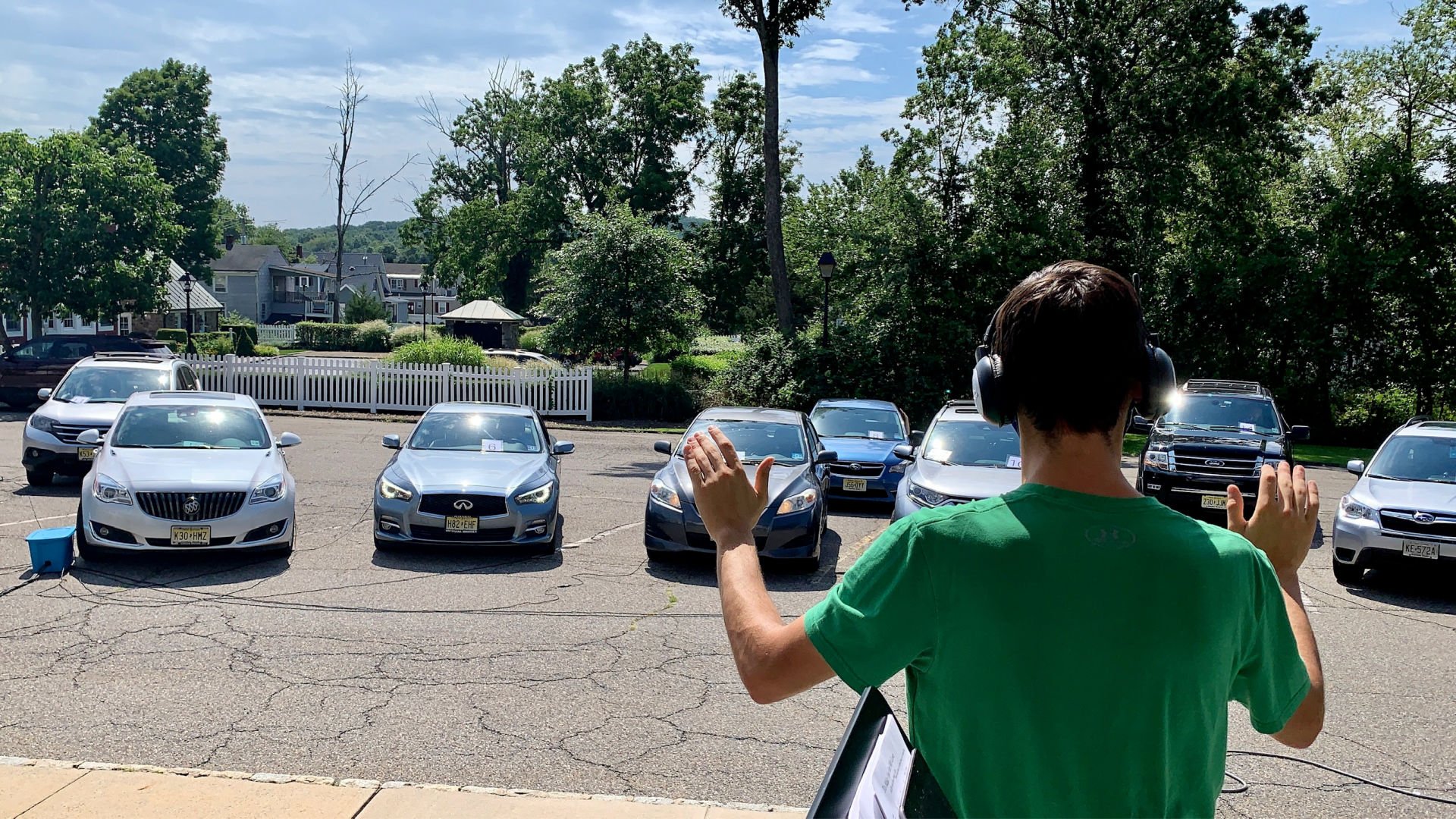 A Car Choir depends heavily on audio equipment. Similar to a live concert where every singer has a microphone of their own, a Car Choir requires that each singer's microphone is connected to a mixer, which combines and balances their sounds into a full choir sound. The full choir sound is played back to the singers through a radio or PA speakers with no perceptible delay.

Some choirs borrowed old or unused equipment from a school or theater, or found cheap unused gear. Others wrote a grant or raised money to purchase the technology they needed. It was not practical to hire an audio professional every time the chorus wanted to sing, so groups found volunteers to run the audio equipment.  Often the audio techs were amateurs who learned it along the way, using the webinars or other online resources.

Despite these considerable barriers, more than 60 groups across the US and Canada developed their own Car Choirs and enabled regular rehearsals and even performances. During the height of the pandemic, when gathering singers in close quarters was declared unsafe for who-knew-how-long, these groups would meet and sing together as often as their audio crew could handle it.

Once they launched their Car Choirs, they sang hymns and barbershop and pop songs. They sang Handel, Brahms, Lauridsen, and Whitacre. They sang Disney songs and Christmas carols, and they made videos to remember and share the joy with their friends and family (who they couldn't visit). For many singers, Car Choirs were a highlight of the pandemic which helped diminish the isolation so many of us were feeling.

Though the need for singing in a parking lot has faded, many singers made new friends, learned new skills, and re-discovered the importance of making music together through this shared experience. 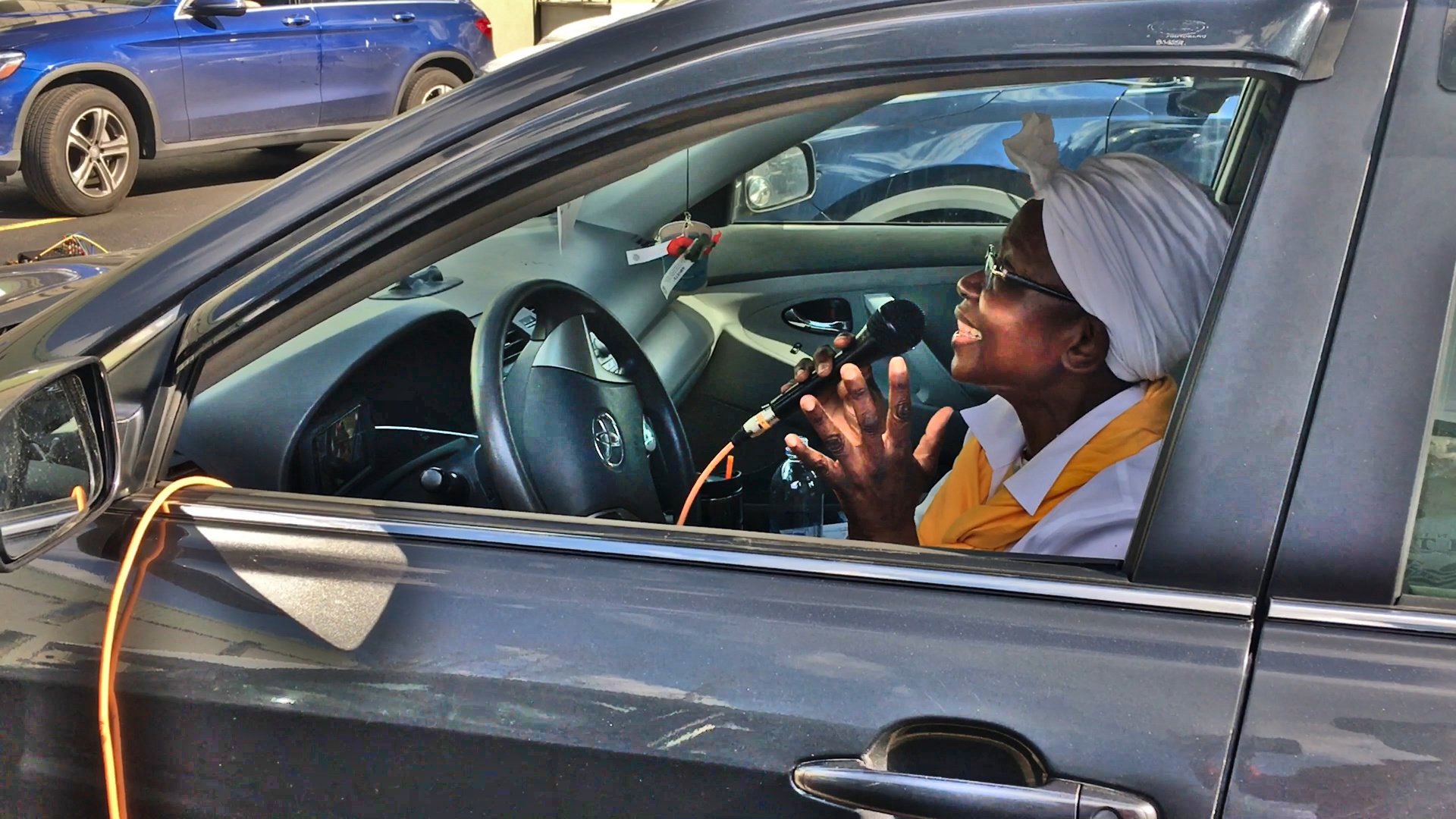 A member of Joyful Voices of Inspiration sings a gospel tune on a hot day in April 2021, in a parking lot event organized by the Denneys.

Car Choirs: In The News

As a rare positive story in such a bleak time, Car Choirs appeared in many news stories at the time, attracting media attention by NPR, local TV stations, and the Today Show. (You can watch these stories here.) Exciting for the communities involved, these stories brought recognition to the choruses and the people who made these unlikely events possible. It also gave our audiences something to smile about. But we believed there was a larger story to tell that never seemed to fit into a 4-minute TV news segment.

It's a story of tech-savvy musicians who tried new things and shared all their successes and failures with each other. A story of audio amateurs and experts who donated their time and knowledge generously with anyone who asked…of like-minded musicians finding each other online and helping solve the practical challenges…of communities who came together to donate equipment and funds and parking lots…of singers forging community in the face of adversity.

We are grateful to be part of this new community that was formed from Car Choirs. We contributed a lot but we received back even more. We met more musicians during the pandemic—this time of isolation and canceled events—than we ever had before.  We made new friends online and in person. It was a surprising and unique time, and we decided we had to document it to let the story be told.

Experienced filmmakers we are not. We had made family vacation and storytelling videos before, but this was another level. We began by talking with some film experts and sharing the idea of a documentary with our new community. We requested photos, videos, and stories and worked with a young filmmaker, Justin Lahue, on the storyline and editing. Interviews and videos of Car Choirs in action came flooding in. All in all, we had 160 hours of footage to choose among!

Over seven months, and with Justin’s guidance, the film was edited over and over again, and by January 2022, we had a final documentary in our hands. Our friend Russ Gannon, who has done voice work for Frontline, added stirring narration. Most difficult: trailers, music licenses, fundraising for the music licenses, and then submitting it to film festivals.

Just as we created the mechanics and logistics for Car Choirs, we started out not really knowing anything about the film industry. So we searched online, asked for advice, experimented and learned. Now we are thrilled to announce that The Drive to Sing has been selected for 9 film festivals!

In The Drive to Sing, viewers get to see the wider perspective of the Car Choir community, from the key players whose ingenuity helped so many people continue singing to the choirs and singers that were able to bring happiness and togetherness to their communities.

67 songs are featured in The Drive to Sing, every one of which was recorded during the pandemic in cars, parking lots, and unusual places across North America. The music is full of heart, joy, and the type of personal connection that is possible only when people sing together.

Did you join in the Car Choir trend? How was your experience? Please make a comment after this article, so that we can hear your story! 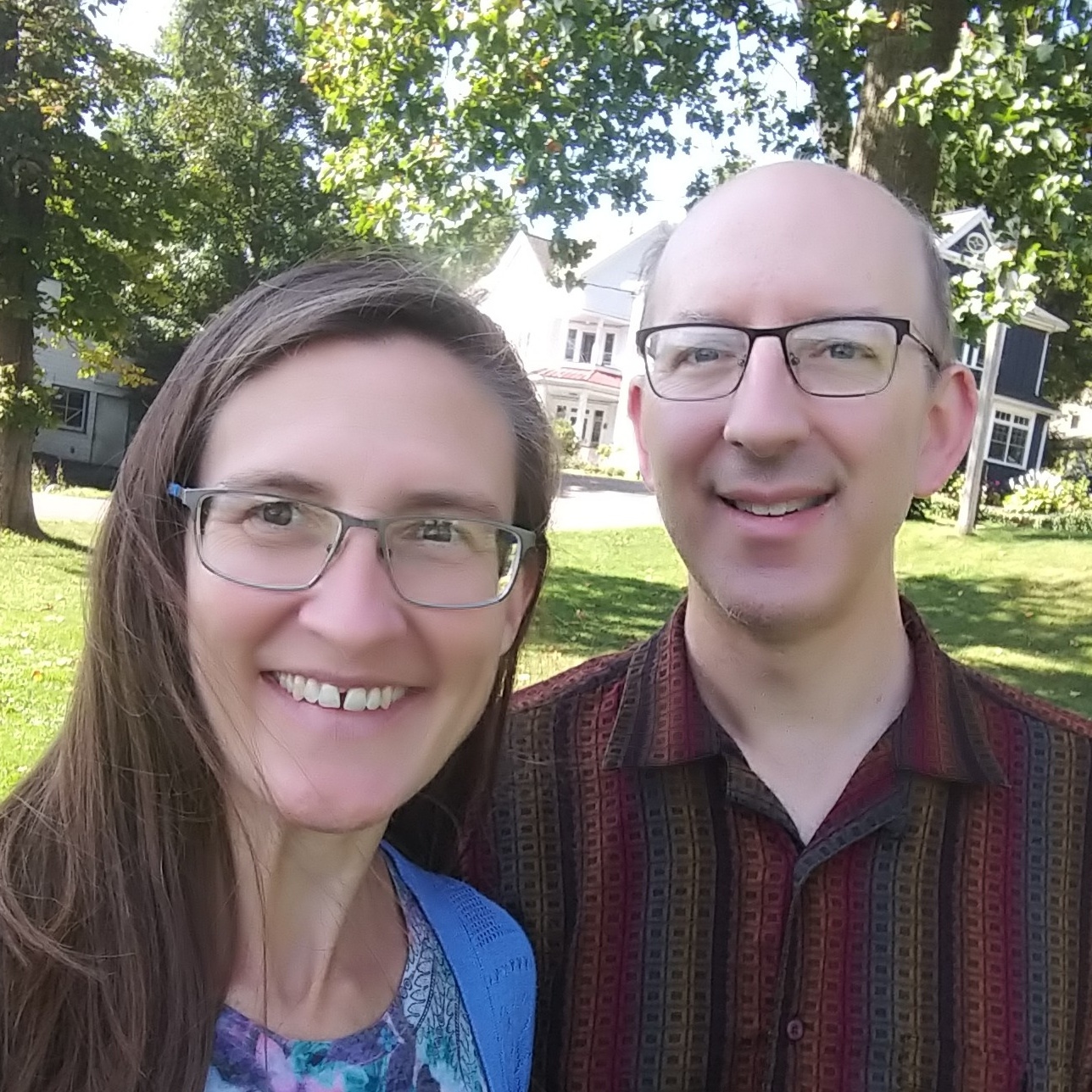 Bryce and Kathryn Denney met at Oberlin Conservatory when Bryce accompanied Kathryn's Junior French horn recital on the piano. Through their 23 years of marriage, they have performed together in theaters, churches, schools, and other venues. Kathryn loves to teach music, conduct choruses, and direct musical theater productions, including her new musical "Connected" which opens at the end of September 2022. Bryce is a microchip verification engineer with a passion for music. The restrictions of the pandemic unexpectedly provided an opportunity to learn new audio/video skills and to contribute to the arts.