A Chorus Management Success Story: Transforming a Choral Concert to a Film

When the global pandemic hit in early 2020, the question for choirs everywhere became what to do next. As it became clear that we would not be able to perform live again during our 2019-2020 season, VOX Femina Los Angeles got creative.

VOX had been awarded a grant from the National Endowment for the Arts to support the creation and performance of the Suffrage Cantata, a brand-new, five-movement commission by award winning composer Andrea Ramsey, celebrating the history of the women’s suffrage movement. VOX’s Founding Artistic Director, Dr. Iris S. Levine, was determined to bring the 40-minute piece to life in spite of the many constraints that had been put in our way by a global pandemic.

In July of 2020, VOX began work on an ambitious project: to bring the Suffrage Cantata to life as a film, through the music and narration paired with archival footage of the movement. The film tells the story of all of the women who fought for our right to vote, and shine a light on some aspects often left out of the history books.

VOX hired producer and director Helen Mendoza, a professional filmmaker and founding member of VOX, to bring all of the components of this project together. The singers continued to meet every week for online rehearsals through Zoom and worked both as the full group and in smaller break-out groups to clarify rhythm, pronunciation, and notes.

To facilitate and support the online rehearsal process of learning and shaping the music, Dr. Levine created guide tracks for the singers, working with a sound engineer to lay down temporary (midi) instrumental tracks to accompany the singers, which were then aligned with the visual aids of both Dr. Levine conducting the music and the notation simultaneously scrolling along the top of the video.

Each individual singer worked with these videos and submitted an audio recording of their voice singing alone on their part. Adjusting to this new setting required hours of practice and involved a great deal of trial and error, including recording everywhere from their bedroom closets to garden sheds, before each singer felt like they had captured a recording filled with musicality and expression from their own homes. 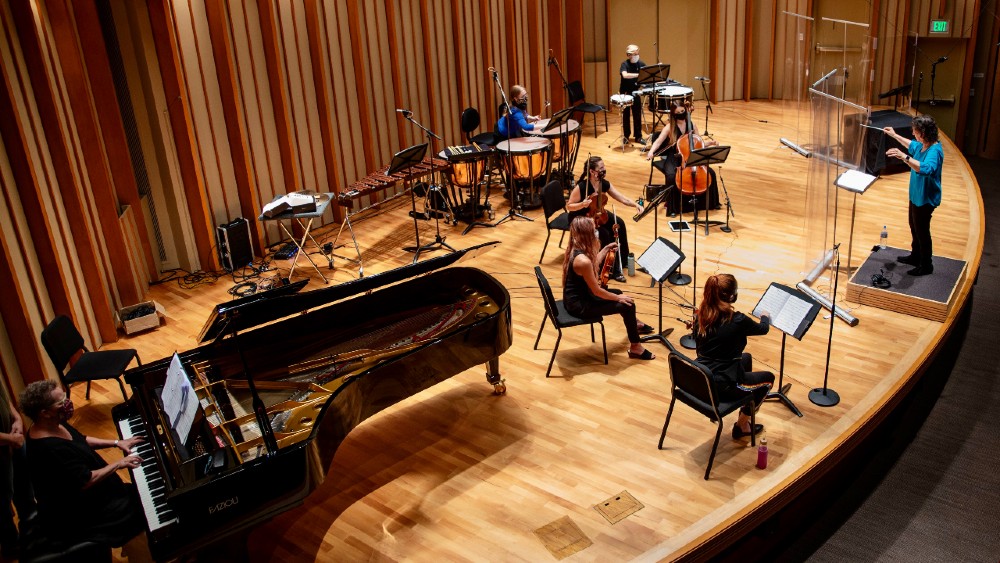 In the meantime, Dr. Levine, along with Mendoza and Production Coordinator Chris Fox, rehearsed and filmed a chamber orchestra and vocal soloists at the Colburn School’s Zipper Concert Hall. Every safety precaution was taken, with all musicians, technicians, and members of the production team masked, temperatures taken before entering the building, and the all-female group of instrumentalists spaced out a minimum of 8 feet apart on the stage and separated by acrylic "sneeze guards."

Cameras were set to record both a wide angle shot of the full ensemble and close ups of the individuals. Dr. Levine conducted while listening to the original midi files created for the singers so that the timings could be matched in post-production. Because time constraints were incredibly tight, the morning was spent rehearsing and then in the afternoon each movement was filmed only twice, relying on the professionalism of our incredible ensemble of instrumentalists. The singer’s individual recordings were then combined and lined up with this live-studio orchestral performance as featured in the film.

At the end of August and beginning of September, Mendoza and Fox held three filming sessions, where they captured outdoor footage of small groups of singers lip-syncing to the recordings they made from home. Again, singers were masked between takes and spaced out 6-8 feet apart.

Gathering Interviews and Exploring the Archives

Meanwhile, in Kansas City where the composer lives, a film crew recorded both the narration and interviews with Andrea Ramsey at the historic Unicorn Theatre to be used as both a prelude and the story arc of the final piece.

As part of the production team, Mendoza employed an archival footage research assistant who reached out to a number of organizations, including the National Susan B. Anthony Museum and House, the University of Rochester Libraries Department of Rare Books, and the University of Chicago, Ida B Wells Papers, for assistance in compiling the archival photos of the Suffrage Movement that are interspersed throughout the film.

After hours and hours of post-production work, the film debuted to a ticketed audience on November 1st, using a platform called Ticket Spice, which VOX also used for this project for the first time.

Tickets were sold at two price levels: a general admission level with access to the film on the premiere date with a 48-hour viewing window and a VIP level which included a post-film discussion with the composer, producer, and both the artistic and executive directors of VOX Femina. Because the program was online, VOX was able to reach a much broader audience across the country and even as far as Canada, Mexico, and Europe. 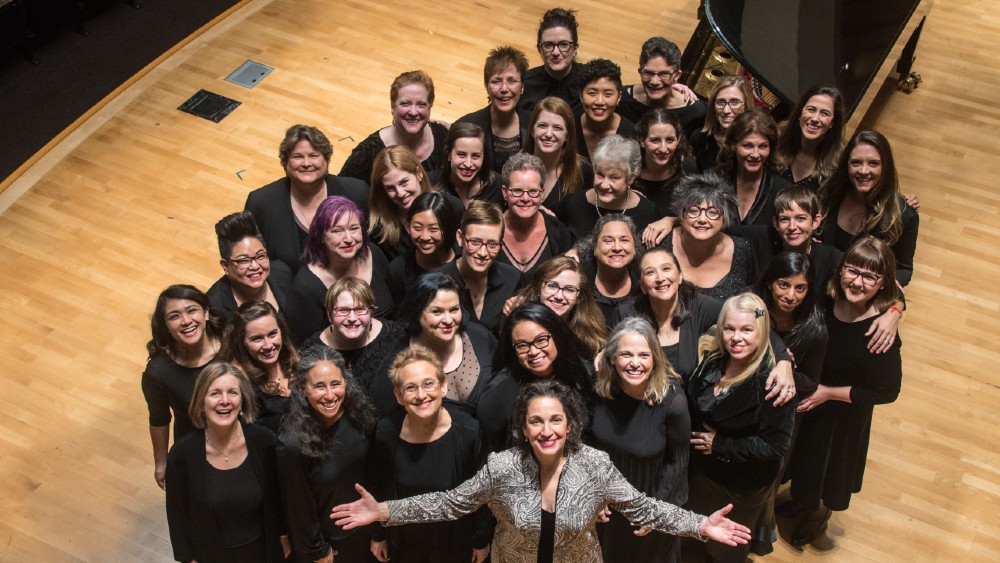 The film brought with it a huge learning curve for everyone involved, but also demanded a new kind of creativity from the entire team that provided the energy that helped carry us through some difficult months together.

Is it the same as collaborating to create a live concert? No. Do we miss performing in front of a live audience and actually being able to see the joy that our music brings to people? Yes. But did this project provide us with a sense of purpose, of community, and a creative outlet at a time when that seemed almost impossible for singers? Absolutely.

For those interested in seeing the final product, tickets for Shout the Revolution! can be purchased for $10 here.

Joanna Mitchell is a writer, actor, and musician, who occasionally moonlights as an arts administrator. Her most important job, however, is as mother to Lulu and Imogen. She holds degrees in acting from Syracuse University and the London Academy of Music and Dramatic Arts, as well as a Diploma in Opera Performance from Birkbeck University.