How to Assign Voice Sections to Your Transgender Choral Members

I first heard the term salience of identity in my undergraduate studies. If you are unfamiliar with this term, it basically refers to the multiple facets that comprise our identity. Salience of identity can be defined as your answer to the question, "Who are you?" When you ask yourself that question, what is the first word that comes to mind? Is the first word mother or father? Is it choir director? Man? Humanitarian? Friend? How do you rank portions of your identity against others? What is the most important qualifier or term that best describes you?

In my time as a choral musician and subsequent music educator, I have been fascinated by how we musicians come to assimilate our instrument into our identity. I once worked with a band director and an orchestra director who came together to do an Instrument Testing Night for incoming 6th graders. When the orchestra director, a self-described "nerd," would mention this event to 5th graders, she would describe it as akin to the Sorting Ceremony in the Harry Potter novels. Budding musicians would come to the event and find the "best" instrument that suited their physicality. Once said instrument was determined, they would be assigned to that instrument.

And much like the wizards in Harry Potter began to identify with their Houses of Ravenclaw, Gryffindor, Hufflepuff, or Slytherin, as these young instrumentalists progressed in their musical studies, their identities began to incorporate their instruments into their descriptor. Who is Timmy? Oh, he's that 7th grader, who plays tuba. Later on in adult life, even if Timmy, now Tim, has since stopped playing the tuba, if somebody in the office mentioned that they were in band, Tim's eyes might light up and say, "I was in band in middle school! I played the tuba!" The musical identity that he had in band fused into his life-long identity.

I find that this phenomenon is not exclusive to instrumentalists. Vocalists begin to identify with their assigned voice parts, even at an extremely early age when they aren't a "true" soprano, alto, tenor, or bass. I can't tell you how many students I have instructed have been upset with me because I asked them, for example, to sing alto for a piece, and they told me they didn't want to because they "weren't an alto." The student might have had all of the alto notes within their range, but at some point in their musical journey, they began to identify with the soprano section, so much so that they self-described as a soprano. And like freshly poured concrete, the longer they remained in the section, the more that section identity hardened and became a permanent fixture in their musical identity, regardless of subsequent voice changes.

Sections and voice parts become a fundamental part of our musical identity in the choral world. As our choral members, especially those newer to ensemble singing, come to us, needing a section to be placed into, we naturally turn to their vocal range. What notes can they sing? Where is the strongest part of their range? Where is the weakest? Most directors tend to follow what has historically been the case in the choral world; those assigned male at birth (AMAB) sing tenor or bass, and those assigned female at birth (AFAB), sing soprano or alto. And due to this historical assignment of genders to voice parts, choral society has subsequently gendered these voice parts. Sopranos and altos are always women, and tenors and basses are always men. Anything like a boy soprano or a female tenor tends to be considered with an asterisk, a rare exception to the rule.

But the problem is that these restrictive genderings no longer fit into our society. We know better. There are too many people, especially in the transgender, non-binary, or gender-expansive populations, who find themselves left out by these historical gendered lines. And while some may say that voice parts are, in fact, ungendered or are no longer gendered, the pervasive stain of how society has viewed voice parts historically still ensures gendered connotations for sections that more than likely will continue forever. So how do we, as choir directors, navigate this, ensuring the best and healthiest sound for our ensemble, but still respecting our members' collective identities? It starts with compassion. 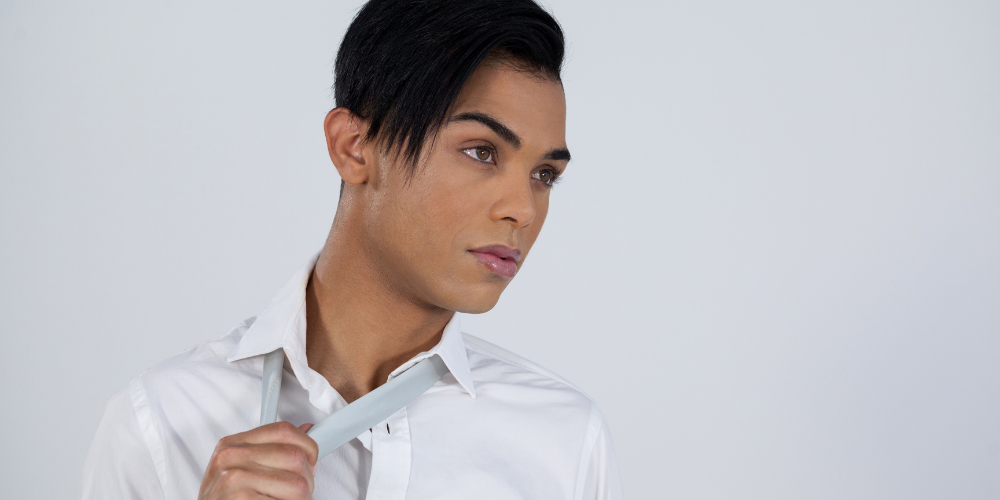 Recognize that anything that has a history of restricting people to a binary from one's assigned sex at birth (ASAB) will have a high chance of making transgender, non-binary, or gender-expansive people uncomfortable.

When doing auditions or voice placements, be mindful that your trans, non-binary, or gender-expansive members might already be in a heightened state of anxiety or nervousness. Let your understanding of that situation guide you in all of your mannerisms. The more comfort and warmth you can display, the better.

Acknowledge the potential discomfort and dysphoria that comes from vocal placements. Have a discussion with your choir member to see where they are most comfortable and why they feel that way.

Let these members know that your first priority is their happiness and comfort above all else. I’m sure you didn't get into directing choirs to tear down other people! As you begin to decide where a choir member should sing, consider their paradigm. If they identify as more feminine, and you assign them to be a tenor or a bass, will the historical masculine connotation of those sections bother them? Will they be okay with it? You won't know until you talk to them. Every person is different.

Remember that you direct the whole human, not just an instrument!

I have met directors who try to argue that a section is strictly based on vocal ranges, and nothing else should be considered. However, if you enforce that philosophy, you will lose membership in your ensembles. If somebody identifies as more masculine and wants to sing tenor or bass, but you think they belong as a soprano or an alto, see what compromises can be made. Maybe you can work with that person individually to develop their vocal range, extending their lower register to where they can sing tenor. Maybe they can't hit every note in the tenor line, so they just sing the tenor notes they can sing and "fake" the ones they can't. Be creative and find ways to think outside the box. Maybe their "best" section placement isn't going to be the "best" musically. That's okay. It might be the best choice for their spirit or soul.

Be intentional about using non-gendered language in your rehearsal.

It can be so easy to try and be efficient in our rehearsals, saying something like, "Men sing this note, women sing this one," or "Ladies, please stand." But this kind of language can alienate transgender people, or at the very least, make them feel discomfort. This is especially true if you have those people singing in a voice part whose gender connotation might not match their gender identity. Work to use voice parts or non-gendered terms in your instructions. When addressing the whole ensemble, I lean into my Texan roots by using the word, "y'all," or if I'm feeling especially Southern, "All y'all." One of my favorites that I have stolen from Dr. Allen Hightower at the University of North Texas is the simple "friends." (I once referred to my middle school ensemble as "Snickerdoodles"—they were less than impressed). The possibilities are endless. This is an easy way to still be efficient with your language but not accidentally cause discomfort.

One of the worst moments of my choral career was when one of my collegiate choir directors forced the choir to sing in an SATB formation. I was a bass, in a choir dress, and not only did the "men" (tenors and basses) process in on one side while the "women" (sopranos and altos) came in on the other but I was placed in such a position that I was the lone choir dress in a sea of tuxes. The director's poor choice in standing arrangement led to me being instantly and publicly outed. Blend your standing arrangements so that you do not do this to other trans, non-binary, or gender-expansive singers. If your singers are not musically ready to sing with all sections mixed up, that's okay. There is nothing wrong with a STAB formation, or a SABT formation, where your trans singer can stand at the boundary between sections, next to somebody wearing the same uniform as them.

Our job as choir directors is to make musical experiences that can be appreciated by audiences, choir members, and other musicians alike. Our job is not gatekeeping the choral experience from those who do not identify as cisgender. It is our responsibility to take care of our choral members and allow them to be a part of the music. If this concept of taking other considerations outside of vocal range for section placements is new and foreign to you, that's okay. Take some time to mull it over. Try to put yourself in the shoes of somebody the choral community has historically excluded. Then start thinking about how you could go about it for your ensemble. It might be a little daunting, but I promise it's worth it.